Home Uman Why don’t we have any idea of what Rebbe Nachman Zatzal looked like?
Uman

Why don’t we have any idea of what Rebbe Nachman Zatzal looked like?

Q: Why don’t we have any idea of what Rebbe Nachman Zatzal looked like?

http://breslov.org//comment-on-the-reputed-portrait-of-rebbe-nachman-of-breslov-z%E2%80%9Dl/ where Ozer Bergman discusses this.

There were certain physical features we know about him, such as that he had red hair, was tall and that he had a short beard, he certainly didn’t look like what some people would require todays 21st Century Rebbe’s to look like.

In a similar vain to what Ozer has already written, perhaps it was not the physical features of the Rebbe that Rebbe Nosson and/or the Rebbe himself wanted us be preoccupied with. Perhaps it was the message that the Rebbe correctly predicted would burn until the coming of Mashiach that we are to strive to live with. This “intangible” image of the Rebbe would be color blind and could transcend all physical or other type of barriers which human beings are so apt to create. It would also prevent anyone from making an “Avoda Zara” or idol out of the physical appearance of the Rebbe which automatically forces people to attach themselves to the pnemiyut or essence rather than a relationship based on physical features. 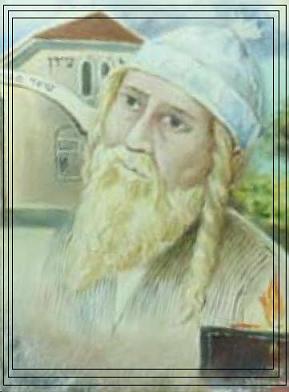 "The Very Disputed Portrait via www.vosizneias.com

Yossi Katz is the US Executive Director of the Breslov Research Institute, the preeminent English-language Breslov publisher. He is the creator of BreslovCampus.org, the largest online Breslov educational site. He writes the weekly column "Pathways on the Parasha," as well as numerous articles, for Breslov.org. He studied in Beth Medrash Gevoha and lives in Lakewood, NJ.

And Moshe Built the Mishkan

Who and Where is Amalek Today?

Prayer To Be In Uman For Rosh HaShanah

Preparing to Approach the Tzaddik

When You Speak to the Creator, Drop Everything

The Land of Israel and Uman

Keeping the Connection Every Day

Come to Me For Rosh HaShana

Unlimited Kindness and Traveling to Rebbe Nachman for...

When I was a new mekurov, I heard from Rabbi Yakov Horowitz, now Rosh Yeshivah of Darchei Noam of Monsey, in the name of Rabbi Levi Yitzchok Bender, zal, that the Rebbe was short, quite thin, and had “straw-colored” hair — that is, a darker shade of blonde — that his peyos were long and not twisted or curled, and that he had a small beard. Reb Levi Yitzchok also would tell those who asked him what the Rebe looked like, “Is this important? If you want to see the Rebe’s face, look into Likutey Moharan!”

That’s what I remember, anyway.

Well I remembered always hearing the hair was red and that he had a short beard so I did a quick google search just to double check and saw that he was tall as well. I couldn’t remember whether I had heard that before but decided to add that as well. The source was from Tzaddik Magazine Rosh HaShanah 1999 published by Nachal Noveah Mekor Chachma.
Here is the quote: “Although no picture or drawing of him exists, according to oral tradition, he was tall and slender with reddish hair and a thin beard.” I don’t know exactly who wrote the article but figured that NNMC Tsfat was a credible source. Here is the link to the article: http://www.nachalnovea.com/LiveTransmission/tzaddikarchive/roshhashanah5760/rebbenachman.pdf

I would suggest checking with baalei mesorah in the kehillah directly at this point. Some people to approach would be Rav Nachman Burstein or Rav Moshe Burstein in Yerushalayim, Rav Noson Liebermentch, Rav Elazar Kenig in Tzefat, etc.